A man has come forward and is assisting officers with their investigation. No arrests have been made at this stage.

Officers investigating a sexual assault in North Dorset are issuing an image of the suspect and appealing for anyone with information to come forward.

At around 12.30pm on Tuesday 23 February 2021 a 16-year-old girl was walking her dog on the North Dorset Trailway between Blandford and Stourpaine when a man made conversation as he walked past her.

They had a brief conversation, before he began to make inappropriate comments. The man reportedly shook the victim’s hand to say goodbye and as she attempted to pull away, he grabbed her wrist and pulled her hand down to touch his crotch area.

The man, who is described as being approximately 35 years old and five feet six inches tall, walked away following the incident in the direction of Blandford.

Police Constable Richard Cooke, of Blandford police, said: “This incident understandably left the victim feeling stunned at what had happened and we are carrying out a number of enquiries to identify the man involved. 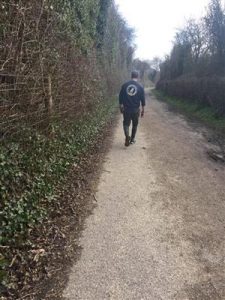 “I am issuing an image of the suspect and would appeal to anyone who may recognise him from his clothing to please get in touch.

“I am also keen to speak to a woman who was walking a dog along the North Dorset Trailway at the time of the incident and walked past both the suspect and the victim as she may have important information to assist my enquiries.”

Anyone with information is asked to contact Dorset Police at www.dorset.police.uk, via email 101@dorset.pnn.police.uk or by calling 101, quoting occurrence number 55210030875. Alternatively, to stay 100 per cent anonymous, contact the independent charity Crimestoppers online at Crimestoppers-uk.org or call Freephone 0800 555 111.